Sinestro was a member of the Green Lantern Corps. who, surprise surprise, eventually turned evil. The only person to predict this was Obviouslon, and then Gostopem had to go stop him. But Gostopem was defeated and with his dieing breath gave his power ring to Ryan Reynolds to get revenge and kiss a girl for him. 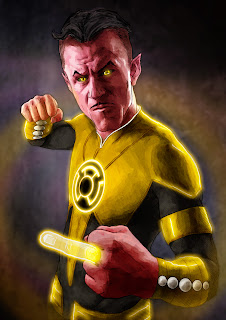 At least that's what I think the story is, I grew up on Marvel comics. From what little I actually do know about Sinestro he seems like a interesting enough villain, that and the costumes of anybody associated with the Green Lantern Corps. tend to be pretty awesome.

In Blackest Day
In Brightest Night
Beware Your Fears Made Into Light
Let Those Who Try To Stop Whats Right
Burn Like His Power
Sinestros Might
at 9:30 PM