Soul of the Blob

Katamari Damacy was a great little creative game when it first came out. Based on a really simple (albeit odd) idea and a quirky world. 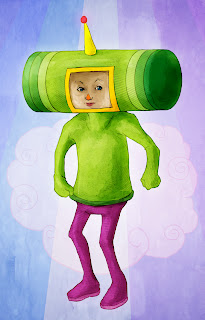 The King of all Cosmos accidentally destroys many of the heavenly bodies in the galaxy after a night of too much drinking. He tasks his son (controlled by you) to create new stars and planets. You do this by rolling up everyday objects, starting with tiny little thumb tacks and eventually working your way up skyscrapers and whole continents.

I wish I would have had more time to do a piece more fitting for one of my favorite games. The game has an amazing soundtrack and simply oozes style. Frankly I could go on and on about the games unique Japanese charm/insanity but I think the opening will do a better job.