Well I'm back from vacation. It was great to get away from work and just laze about the Oregon Coast. It's been seven days since I've worked on anything alien related so time to get back to work. 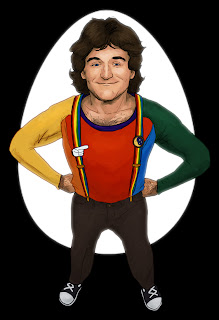 Mork and Mindy was Robin Williams breakout role, and it's basically the character he's gone on to play for the majority of his career. The plot of the show is that Mork, a goofy alien, is sent to Earth to learn about life here. He winds up living with a woman named Mindy who often seems more concerned about hiding the fact that Mork is living with her from her father than the fact that he is an alien being. The show is actually a spin-off of Happy Days. I watched a little bit of both while working on this and the eye rolls far outweighed the chuckles.


Here's a video of Mork fighting the KKK, wait...what? I'm guessing this took place toward the end of the series around when it got canceled.