Kids growing up in the 80's had plenty of anthropomorphic superheroes to choose from thanks to the immense popularity of the Teenage Mutant Ninja Turtles. There were the Street Sharks, Biker Mice from Mars, Extreme Dinosaurs, the Cy-Boars (how the hell did I miss drawing those guys during my 365 Cyborgs?) and of course the Snailiens. 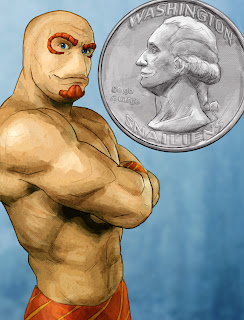 I had a couple of the Snailien toys and if I can recall correctly they were a team of little alien snail men who crash landed on Earth along with some enemy aliens (the Lunarticks) in a similar situation to the Transformers. The four snailiens took their names from the pieces of coin currency, Washington, Jefferson, Roosevelt, and Lincoln. I bet if they were popular enough a female Sacagawea would have shown up at some point.
at 3:53 PM