The Marathon Series was an early FPS created by Bungie. It introduced a full 'free look' system, allowing players to control the players view/aim with the mouse. Most people are unaware of Marathon and its influential gameplay due to the fact that it started life on the Mac. 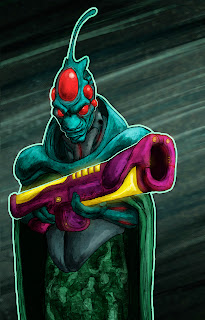 Another interesting factor of Marathon was its fairly engaging narrative, involving evil aliens and computers that have lost their virtual marbles. It also has many similarities to Bungie's best known game; Halo. Many people view Halo as a kind of quasi remake or prequel/sequel to Marathon.

This is a Pfhor Enforcer, fairly deadly but if you manage to kill them you are able to use their gun.
at 12:31 PM