There is a being in the Marvel Comics universe named Galactus. He is one of the most powerful figures in the universe. One day Galactus came to the planet Zenn-La to consume it for energy. An astronomer name Norrin Radd convinced Galactus to spare his planet and in return he would become his herald. He would search for planets that would feed Galactus and provide notice to any sentient life of the coming destruction. 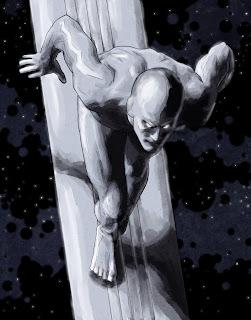 Galactus bestowed the power cosmic (which would be an awesome band name) upon Norrin and he became the Silver Surfer.

Well, enough of my rabble. If you want to watch Richard Gere talking about the Silver Surfer check out this clip.
at 11:28 AM