Are you a Banana or are you just Happy to see Me?

Looking back at the aliens I did last month I realized that the majority of the creatures were fairly humanoid. I'm gonna try and remember to draw more critters and not just face bumpy dudes. Speaking of which expect an actual Critter drawing some time soon. 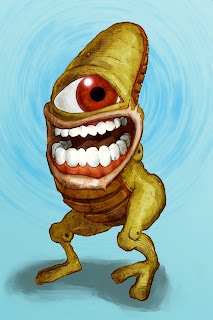 Alien Soldier is one of the few games made by Treasure that I haven't played, which kind of sucks because it was supposed to be a pretty awesome game (as most Treasure games are) It was a mix of sidescrolling beat 'em up and shooter. Think Contra (or Gunstar Heroes if your awesome) mixed with Streets of Rage (or Mischief Makers if your awesome) and you have a rough idea of what Alien Soldier is.
The levels were mainly a place to wail on minor minions powering yourself up in preparation for a boss battle or two. There were 28 bosses and minibosses spread throughout the game. This little guy is one of the small baddies but I'm sure a boss or 2 will show up at some point down the line.
at 8:27 PM