Pikmin was kind of a weird game when it came out for the Gamecube. It was a kind of a real time strategy game mixed with a bit of adventure. For the non-geek out there, that means you created stuff to fight bad guys and explore the world. The interesting thing about Pikmin was instead of building tanks or flamethrower units you befriended local creatures (the titular Pikmin) and taught them the horrors of war. 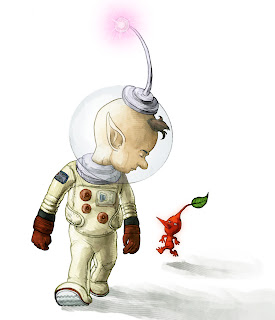 You played as Captain Olimar, whose spaceship crash landed on the earth like planet. Due to oxygen being poisonous to Olimar he had to plan his escape from the planet in 30 days. Depending on how many goals you accomplished through the course of the game you would get a couple different endings. Either Olimar would die (but be resurrected as a Pikmin yourself) or fly back to his planet while the Pikmin try to figure out how to satiate their bloodlust.
at 6:13 PM