I was originally going to draw Marvel comics Medusa today. Then I realized that Medusa is an inhuman not an alien. So instead of scrap the start of my drawing I decided to rework the piece into another comic book heroine with a penchant for purple and a shock of red hair. 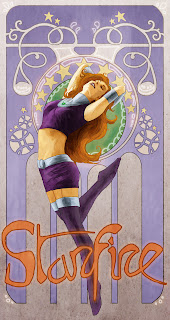 Starfire is from DC comics and luckily for me is an alien from the planet Tamaran. I think her super powers involve flight, energy blasts, and flirting with Dick Grayson. I couldn't bring myself to draw Starfire in her classic costume, far too cheezy.
at 9:02 PM