The last few aliens have been pretty cutesy and lighthearted so I decided to work on a big jerk today. Originally I was gonna do another Doctor Who alien, hopefully doing a better job this time too. After some poking around I instead decided to do an alien from the Dr. Who spin-off show Torchwood. 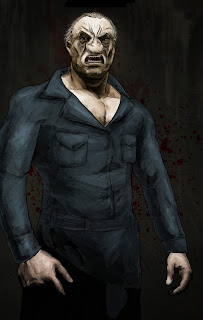 Torchwood is kind of like a British Men In Black. A secret agency who deal with alien threats. The Weevil is one of the first aliens introduced in the series. They live in the sewers and eat poo which tends to make them fairly ornery.

I really should do more research sometimes when doing these drawings. I've only seen the first episode of the series and only have a faint memory of it. Then I only really looked at a few pictures of Weevils on the internet. After watching a few clips I realize I should have had this guy in a creepier pose and maybe had his face pointing a different way to show of the weird shape of the face more.
at 12:18 PM

Email ThisBlogThis!Share to TwitterShare to FacebookShare to Pinterest
tags: bbc, doctor who, lives in the sewere, snarl, torchwood, weevil