I can't say enough good things about Bill Watterson's work on Calvin & Hobbes. His work has only grown on me more as I've gotten older. He's a fantastic draftsman and wonderful storyteller. I kind of view him as the J.D. Salinger of comics. He had a relatively short but immensely successful career only to become a bit of a recluse. Calvin & Hobbes only ran for 10 years 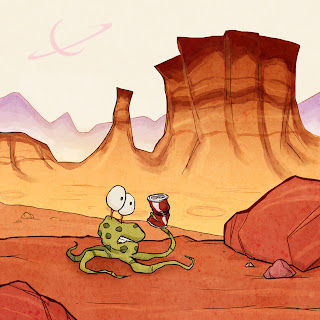 This is the martian from when Calvin & Hobbes flew into space after becoming disenchanted with the Earth.

Oh, I hate the Calvin peeing on things stickers. I hope anybody who has one of those on their truck gets struck down by an awesome T-Rex.
at 3:21 PM

Email ThisBlogThis!Share to TwitterShare to FacebookShare to Pinterest
tags: bill watterson, calvin and hobbes, litter, martians, weirdos from another planet