The term "Jumping the Shark" refers to when something popular starts to loose steam and ends up trying something zany to draw people back in but is actually the shows death rattle. It originated on the show Happy Days when the Fonz actually jumped over a shark. The Flinstones (an older version of today's King of Queens series) eventually jumped the shark with the introduction of the Great Gazoo. 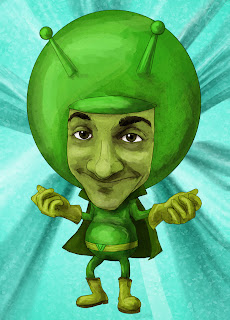 The Great Gazoo was a little green man from the planet Zetox who got stuck on earth during caveman days. He often caused trouble for Fred and Barney who were one of the few people who could see him. He seemed to be an all powerful being but ended just being a pain, in many ways he is a lot like Q from Star Trek.  Shortly after his introduction the show ended.
at 10:37 PM