Star Trek has it's share of funny haircut equals alien race, but they also had plenty of more involved species. Alien Nation on the other had only had one alien race and it was just a bald cap with some spots on it, pretty weak Alien Nation, pretty weak. 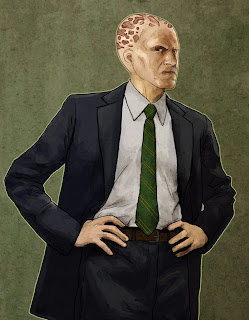 There originally was an Alien Nation movie which then spawned a TV series. The Newcomer aliens were often used to deal with different social issues (like looking like idiots).  Somehow the series was successful (despite the stupid aliens) but due to sloppy management Fox canceled it after one season. Even though I doubt I would enjoy the show if it randomly appeared on TV while I was flipping around I'd end up watching it.