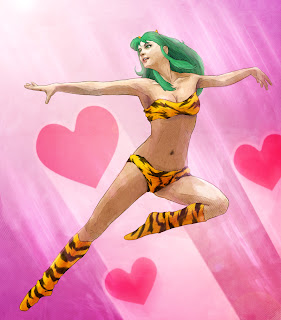 Lum Invader is an anime about an alien invasion turned into a romantic comedy. The oni alien came to earth to conquer it and the only way for humans to stop it was to win a game of tag. The head aliens daughter Lum tried to avoid being caught for 3 days by a human named Ataru. After successfully catching Lum she fell in love with Ataru after a mistaken marriage proposal. Everyone thinks Lum is kind of awesome except for Ataru and his then girlfriend, so wackiness ensues.

Lum is named after the Japanese pronunciation of Rum and the swimsuit model Agnes Lum, shown here in toy form.

I've only seen a couple episodes of the series but one of the movies is really quite good. It's called Beautiful Dreamer and has a lot of similarities to the movie Groundhog Day (which came out several years after) but with some more surreal things thrown in. It was directed by Mamoru Oshii, who has made several of my favorite anime.
at 9:11 AM