Hepzibah is a member of the StarJammers (Space pirates in the Marvel Comics universe) She is supposed to be a skunk human which sounds pretty stupid to me, I guess she used to look more skunky but people realized that was a pretty silly thing to do. 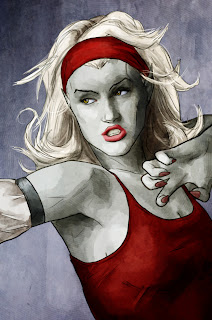 She was inspired by Miz Mam'selle Hepzibah, a cartoon skunk who was a big flirt, who in returns sound like she was based off of Pepe Le Pew. I can't wait until I end up drawing some Alien inspired by that little wussy chicken Foghorn Leghorn always bullied.