I have mixed feelings about the Ferengi from Star Trek.  I'm always annoyed by the little jerks but whenever they have an episode devoted to them it tends to be pretty amusing. They seem to dumb and/or blinded by greed to ever be much of a threat so usually it just ends in wacky shenanigans. 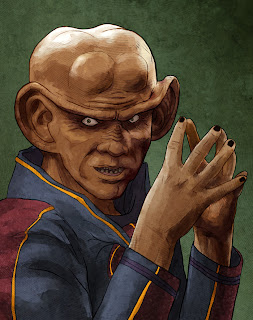 Quark and his brother Rom ran a Space bar on Deep Space 9. He also had a nephew named Nog who I wanted to Punch in the side of the head whenever I saw him, just a second... just watched a couple clips on youtube, yep, I want to punch him in the head.
at 9:56 PM