I really liked the Stargate film when I was a kid. What kid could resist cross-dimensional Egyptian aliens? I've seen a couple episodes of the television show SG-1 and found it entertaining enough. What man child could resist Richard Dean Anderson? 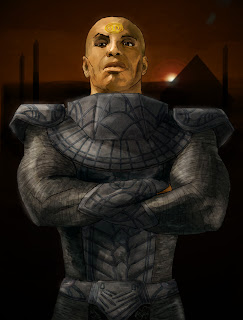 Teal'c here is kind of like the Worf character of SG-1. I decided to depict him in the traditional Space Egyptian armor instead of the more human jumpsuit thing he usually wears. The Teal'c you see here is actually just the host body for a little worm thingy called a Goa'uld. I like the word Goa'uld quite a bit, almost as much as the word Muad'Dib.