I've only seen one of the Riddick movies, the Chronicles of Riddick. Supposedly Pitch Black is pretty good but not sure if I'll ever get around to seeing it. The old xbox game was pretty fun though. Riddick is a pretty standard Vin Diesel character. Tough, beefy guy, who likes to punch stuff. When I first heard about Vin Diesel he actually sounded like an interesting guy. He popped up in Saving Private Ryan and I heard and interview with him where he sounded like a normal guy who was hoping to make good movies. Needless to say it turned out he's kind of a meathead. 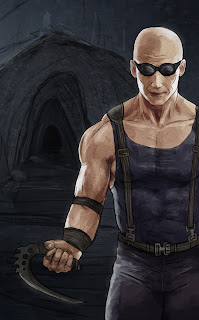 Riddick is one of the last remaning Furyans. He has a few special abilities, most notably his 'eyeshine' which allows him to see in the dark. My wife kind of sums up my view of the Riddick universe while watching a trailer "It looks interesting and like something I'd want to watch then Vin Diesel starts showing up"